Members of the Galilee Chamber Orchestra :

The masterpiece by Pergolesi – Stabat Mater

A special production for the festival of Pergolesi's masterpiece, Stabat Mater, filmed and recorded in Sophien Church, an impressive Protestant church from the 17th century located in Berlin, Germany.

In this church, Dr. Martin Luther King, Jr. delivered a speech when he visited Berlin. The concert will be opened by a female priest who leads the church and will tell its unique. The concert will be played by a Jewish-Arab orchestra composed of Israeli musicians, some of whom graduated from the academy and went to Germany to pursue advanced studies, including graduates of the Polyphony Conservatory (Yaman Saadi, Nabil's student and winner of the 2019 Spring Competition) and members of the Galilee Chamber Orchestra currently studying and living in Berlin.  Stabat Mater, a Catholic hymn from the 13th century, which was composed for a text ascribed to an Italian monk named Jacopone da Todi, describes the moments in which Mary the mother of Jesus, stands beside the crucified Jesus and observes his torment.

** You are invited to meet the artists in an open zoom discussion, hosted by Prof. Michael Steinberg, at the end of the broadcast.

Missed the premiere? The VOD is available until Saturday evening 12/26/20 at midnight. 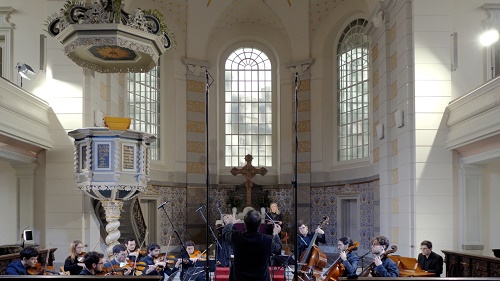